Equity Prices Have Not Kept Up with Profits
Calafia Beach Pundit 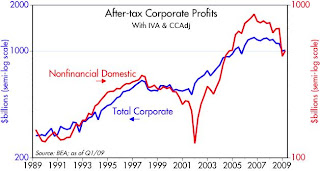 I’ve been arguing for a long time that U.S. equities were substantially undervalued. One of the reasons has been, and continues to be, the relatively strong underlying profits picture of U.S. corporations, as shown in this chart. The data for this chart come from the National Income and Product Accounts, and contain various adjustments which are designed to ensure that they reflect true “economic profits,” not just those that are reported using GAAP. The y-axis for the red line (nonfinancial domestic profits) is exactly twice the scale of the y-axis for the blue line (total profits). That the two lines have changed by the same order of magnitude over the years shows, I think, that there are no other unusual factors involved (e.g., overseas profits, or the outsized losses of financial firms).

Simply put, profits have increased significantly since the last recession, and the decline in profits in this recession is not (at least so far) as bad as was the decline in the last recession, which was relatively mild. But as we also know, the level of equity prices has retreated to 1997 levels. So even if we take out the tech bubble that developed in the late 1990s, stock prices have lagged significantly the huge gains in corporate profits.

One obvious explanation for this is that the market is discounting some pretty awful, very bad, terrible news (e.g., Obama’s spending, tax and regulatory policies, and/or the Fed’s potentially inflationary monetary policy). And that means that any good news, such as even a modest recovery, should be very bullish for stocks.