What’s really going on in the US economy

David Leonhardt’s weekend column in the New York Times on the despondency of the US consumer has justifiably received a lot of play in the interwebs.

The Federal Reserve Bank of New York recently published a jarring report on what it calls discretionary service spending, a category that excludes housing, food and health care and includes restaurant meals, entertainment, education and even insurance. Going back decades, such spending had never fallen more than 3 percent per capita in a recession. In this slump, it is down almost 7 percent, and still has not really begun to recover.

The past week brought more bad news. Retail sales in June were weaker than expected, and consumer confidence fell, causing economists to downgrade their estimates for economic growth yet again. It’s a familiar routine by now. Forecasters in Washington and on Wall Street keep saying the recovery’s problems are temporary — and then they redefine temporary.

If you’re looking for one overarching explanation for the still-terrible job market, it is this great consumer bust. Business executives are only rational to hold back on hiring if they do not know when their customers will fully return. Consumers, for their part, are coping with a sharp loss of wealth and an uncertain future (and many have discovered that they don’t need to buy a new car or stove every few years). Both consumers and executives are easily frightened by the latest economic problem, be it rising gas prices or the debt-ceiling impasse.

Leonhardt’s article mostly conforms to the standard deleveraging narrative, and cites the common Reinhart-Rogoff analysis of plodding recoveries after financial busts. He adds the idea that this is the result of a decades-long debt binge, and that previous consumer patterns are unlikely to return.

The last excerpted paragraph is what you might call the Waiting Game argument. That is, households don’t want to spend money because the unemployment situation remains terrible, wages are depressed, and they’re focused on repairing their balance sheets. But businesses don’t want to hire more people or raise wages because households aren’t spending. Neither wants to end the cycle first.

We agree with most of this and would add the following thoughts, inspired in one way or another by the article:

– So much for “pent-up demand”? Earlier this year, some strategists were floating the idea that although households were displaying general pessimism about spending in the near future, they were more optimistic about the possibility of spending on specific items. Consider this chart from Moody’s analytics (from this April post), which looked at the results of a Conference Board survey:

The notion of pent-up demand was thought to apply especially to the big-ticket items Leonhardt lists above, and which supposedly need to be replaced every few years. Apparently this is not the case, or at least not yet.

– Don’t forget about the “End of the American Dream” story. Leonhardt writes that previous consumer trends are unlikely to continue because households finally reached the end of a decades-long debt binge, but there’s a related secular story to tell about how much Americans spend on basic items.

As we previously explained, the charts show that spending on necessities — Gas & Energy, Food & Beverages, and Clothing & Footwear — has been increasing as a percentage of total consumption expenditure since 2002 with the obvious exception of during the recession, since when it has continued climbing.

Kemp explains what this means by referencing the short-run price inelasticity of these items:

If consumers try to maintain real purchases of energy, apparel and food in the face of steeply rising prices, saving and spending on other goods must fall commensurately, as Professor James Hamilton explains in his survey of “Historical Oil Shocks”.

Because this is mostly a price story (see our earlier post for a longer explanation), a continued decline or even flattening of commodity-related costs might provide the consumer with some near-term relief. But if Kemp is right that this is a longer-term trend unlikely to abate anytime soon, then that’s just one more reason why consumption will continue at a plodding pace.

– We have no idea what the proper amount of deleveraging should be before consumption can again grow strongly. This also depends on which measure we are using. We wrote a few weeks ago that the decline in the debt service ratio tells a more favourable story than the decline in debt-to-disposable-income ratio:

For me, I can see both sides of this story, but keep coming back to this chart: 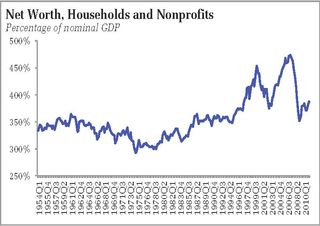 If household are trying to deleverage their way back to a net worth position of 470% of GDP, I imagine the period of deleveraging is only just beginning.  Consider years of cutting debt while hoping asset values rise sufficiently to pull you out of the post-bubble hole – all the while a mediocre economy ensures building assets is difficult at best.

But aside from the deleveraging question, another takeaway from the last chart always rattles in the back of my head: It sure looks like asset bubble-induced surges of net worth were critical in maintaining full employment during the past decade.  And we aren’t coming close to filling that hole with other spending.

Of course, what matters here isn’t just whether consumers try to deleverage their way back to a net worth of 470% of GDP, but the speed at which they try to get there if they do. Whatever the case, Duy’s point about the asset bubble and employment makes perfect sense.

– Bifurcation continues. This is only tangential to the points made in Leonhardt’s column, but we may as well make it while we’re here. What we mean by bifurcation is that the spending patterns of high-income earners and pretty much everyone else have diverged in this recovery (see our earlier post for a roundup of the evidence, which admittedly has its problems). Even as economists continue downgrading expected Q2 and Q3 GDP, consumer confidence remains weak and retail sales disappoint, we spotted this today in a note from Nomura about European luxury goods:

US Same store sales (supportive to soft luxury goods with exposure to the US):  Luxury department stores on average reported sales growth of +7% in April, +11% in May and +10% in June, despite the cold weather that will likely have affected sales of spring collections. Nordstrom data demonstrates that full line stores continue to outperform discount outlets. These results are encouraging for luxury companies with the greatest sales exposure to the US (Burberry: 26%, Gucci Group: 18% and LVMH 23%).

And the note was accompanied by this chart (click to enlarge):

To repeat ourselves, nobody really knows what share of total spending is accounted for by high-income households, but some private-sector economists have estimated that the highest 20 per cent of earners account for between 40-50 per cent of overall spending. Given that these are the kinds of spenders who would have been more likely to have benefited from the wealth effect of QE2, it’s unclear how much longer even this trend will last as it wears off.

Just one more thing to worry about, then.

This entry was posted by Cardiff Garcia on Monday, July 18th, 2011 at 20:13 and is filed under Capital markets. Tagged with consumer, consumption, us.